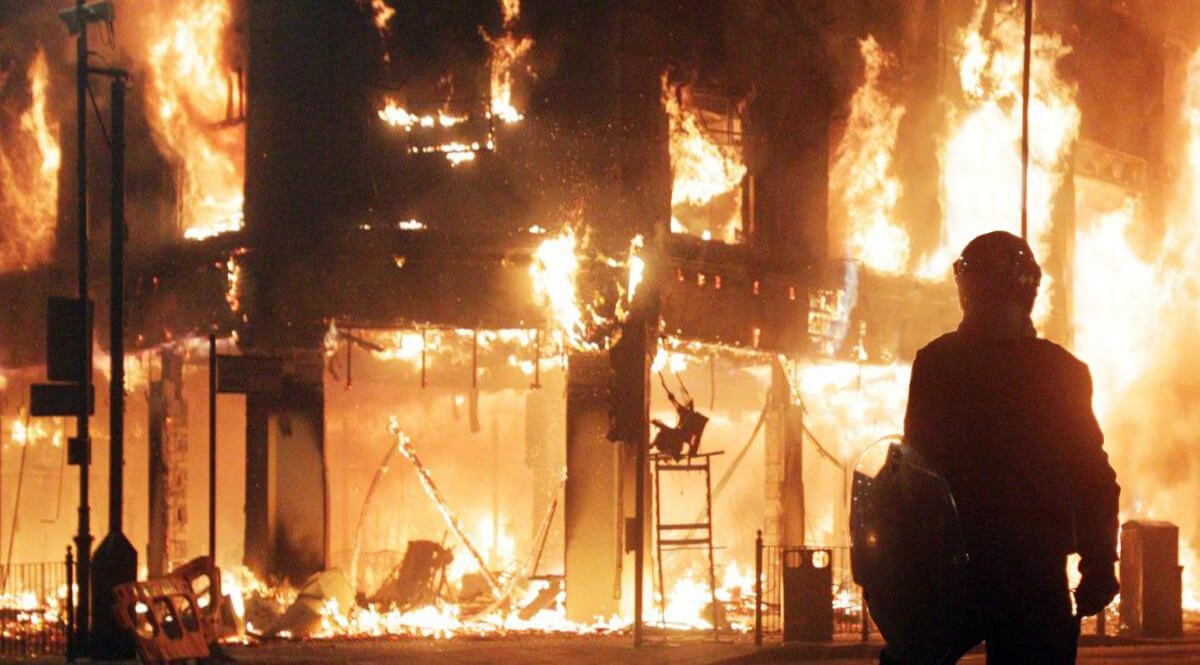 [A sermon delivered in the aftermath of the Los Angeles Riots, 1992]

Now that the ashes have cooled in Los Angeles, now that I’ve had time to think about a lot of the things that have happened, I still have a lot of images that remain in my mind (and I know you do, too). A lot of them had to do with the insanity in the streets—the view from helicopters, the view from passing cars, the burning city that we’ve seen again and again and again played over to us—along with, of course, the beating of Rodney King. But one reporter, when all this was over, pointed out a significant fact. He said there were 30 million black people in this country who did not riot over the Rodney King verdict. I’ll never forget when he made that statement, because it was it was timely; it was useful; it was, in fact, one of the few useful things the media did during that whole riot. One of the more encouraging images that I have, also, is the image of a multi-ethnic group of people with brooms, wearing gloves, out there doing what they could to clean up and try to make sense out of the mess; of people putting together bags of food from outlying areas, and loading them up in trucks, and taking them down to the people who couldn’t get to a grocery store—because the grocery store near them had been burnt out. It wasn’t altogether bad news in the sense that the people of this country are really not so bad. There is still an enormous reservoir of goodwill out there—of people who are ready to help their neighbor, of people who wouldn’t harm a fly, of people who will go out of their way to help someone who needs it. We always get the stories of the people who do the bad things, and we oftentimes don’t get reminded of all the people who do good things along the way.

Inquiring minds, then, will want to know, Okay, where then does the blame lie?, since there are so any good people out there. People are ready to blame the jury, people are ready to blame the system, people are ready to blame the police. Fingers are pointing all over the place after it has been said and done. Forget the blame; I know precisely where the responsibility lies, and I’m going to tell you that today: The responsibility lies with the leadership in this country—leadership from top to bottom—from the highest level to the most basic level, from the east coast to the west coast, from the Canadian border to the Mexican border; the black leadership, white leadership, Hispanic leadership, Asian leadership; leadership of every stripe, every color, every shape, every size, every function. The problem lies with leadership. In fact, the most frightening thing about all these riots to me was the utter lack of effective leadership anywhere on the scene. There was no moral leadership; but then there can’t be moral leadership unless you have moral authority; and you can’t have moral authority unless you have some foundation for strong morals. There could be no effective leadership during the crisis, because no moral high-ground had been established before the crisis ever started.

When that riot was just barely getting underway (there were a few buildings aflame, and relatively few thousand people in the streets at the time), one reporter commented that it was different this time; and it was chilling the way he put it. He said this time there is no honest broker, there is no one that people will look to, there is no one who can speak with credibility to both sides, there is no one in a position of the moral high-ground who can say, Stop!, and people would say, I can see your point—who could address the problems and the difficulties. Everyone out there was seen as compromised, or corrupted, or having taken sides long since, or perhaps of being a liar who would say whatever was to be said to meet whatever situation came along—no one who could serve as an honest broker. All the leaders could do was get on television and plead for calm. But all the people they were talking to weren’t watching television; they were out on the streets stealing televisions. It was a long, long time too late for that. And after listening to that reporter, I couldn’t help thinking about what one of God’s prophets said long ago. The scripture in question is back in Ezekiel, the 22nd chapter…