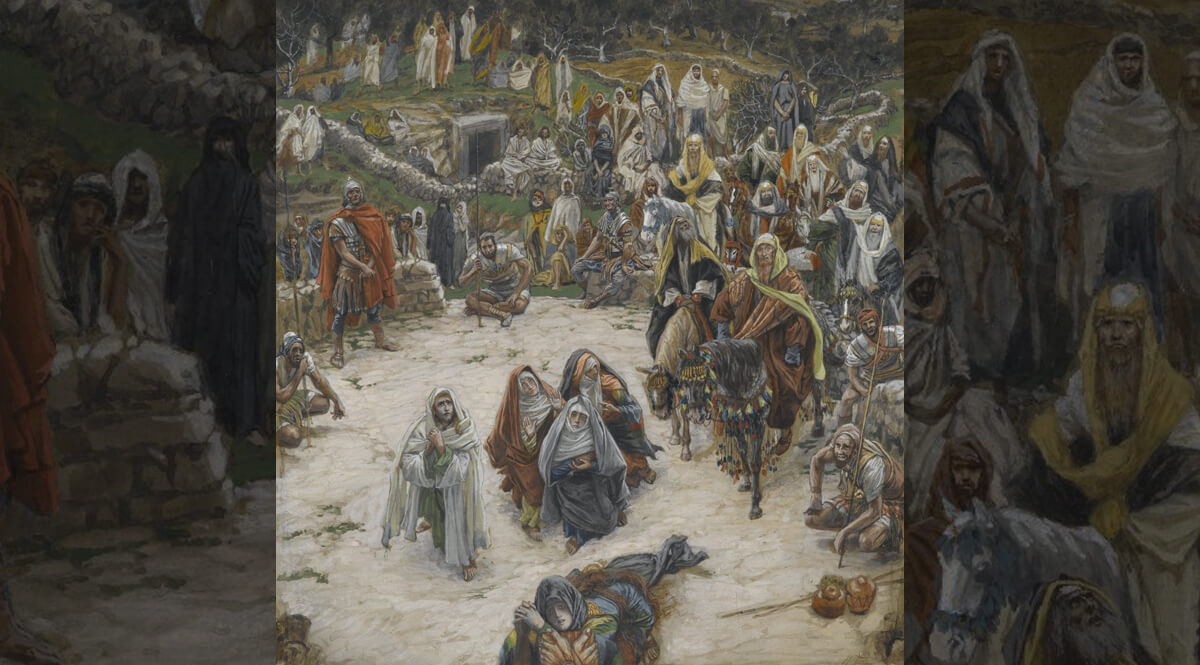 And as they led him away, they laid hold upon one Simon, a Cyrenian, coming in from the country, and on him they laid the cross, that he might bear it after Jesus. And there followed him a great company of people, and of women, who also bewailed and lamented him. But Jesus turning unto them said, Daughters of Jerusalem, weep not for me, but weep for yourselves, and for your children. For, behold, the days are coming, in the which they shall say, Blessed are the barren, and the wombs that never bore, and the breasts which never nursed. Then shall they begin to say to the mountains, Fall on us; and to the hills, Cover us. For if they do these things with a green tree, what shall be done with the dry?

And there were also two others, malefactors, led with him to be put to death. And when they were come to the place, which is called Calvary, there they crucified him, and the malefactors, one on the right hand, and the other on the left. Then said Jesus, Father, forgive them; for they know not what they do. And they parted his clothing, and cast lots. And the people stood beholding. And the rulers also with them derided him, saying, He saved others; let him save himself, if he is Christ, the chosen of God.

And the soldiers also mocked him, coming to him, and offering him vinegar, And saying, If you are the king of the Jews, save yourself. And a superscription also was written over him in letters of Greek, and Latin, and Hebrew, THIS IS THE KING OF THE JEWS. And one of the malefactors who were hanged railed at him, saying, If you are Christ, save yourself and us. But the other answering rebuked him, saying, Do you not fear God, seeing you are in the same condemnation? And we indeed justly; for we receive the due reward of our deeds: but this man has done nothing amiss. And he said unto Jesus, Lord, remember me when you come into your kingdom. And Jesus said unto him, Verily I say unto you, Today shall you be with me in paradise.

And it was about the sixth hour, and there was a darkness over all the earth until the ninth hour. And the sun was darkened, and the curtain of the temple was torn in the middle. And when Jesus had cried with a loud voice, he said, Father, into your hands I commend my spirit: and having said this, he gave up the spirit.