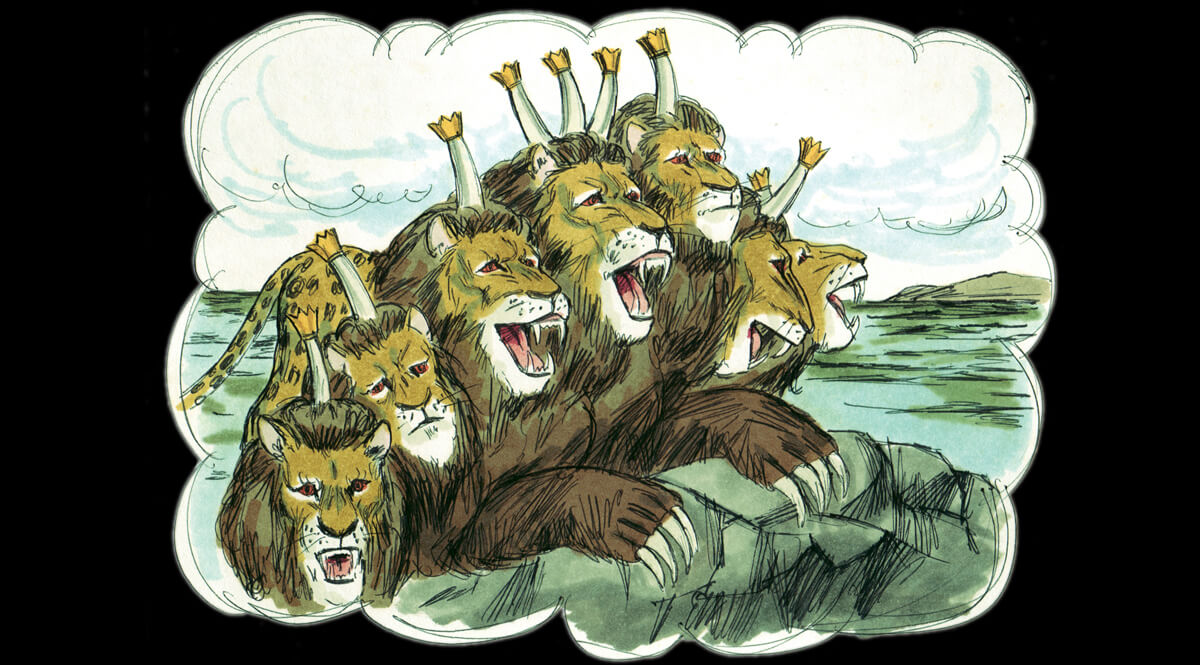 This entry is part 16 of 28 in the series Revelation

And I stood upon the sand of the sea, and saw a beast rise up out of the sea, having seven heads and ten horns, and upon his horns ten crowns, and upon his heads the name of blasphemy. And the beast that I saw was like unto a leopard, and his feet were as the feet of a bear, and his mouth as the mouth of a lion: and the dragon gave him his power, and his throne, and great authority.

We’re in the 13th chapter of the Book of Revelation. Now, Revelation 12 and 13 (and 14 for that matter) are often called inset chapters. But they really belong here because they continue as a part of the seamless description of the vision of John. They include, however, history as well as prophecy. It is almost as though the Holy Spirit is going to bring us up to date on what’s going on here and the whole historical pattern of what is happening here.

Now, time has very little meaning in a vision. So some of what we read here will be past, some of it will be future, and it will not always be easy to sort it out. Our objective in studying this passage is not so much to foretell the future—as appealing as that might be—but to be sure that we understand the future as it plays out day by day because there’s going to be a lot of terrible things taking place. In fact, the whole message of Revelation 12 and is that the dragon is going to practice some staggering deceptions. He’s going to use the beast from the sea, and then a later beast from the land, as instruments of this deception. And the deception, to use the words of Jesus (Mark 13:22), will become so bad that if it were possible it would even deceive the very elect of God. There could come a time when even the most faithful among us could begin to doubt ourselves, our faith, and maybe even our sanity. In fact, it is even possible that some Christians could be deceived into worshiping the beast. But, what is this beast anyway, and what does it mean?