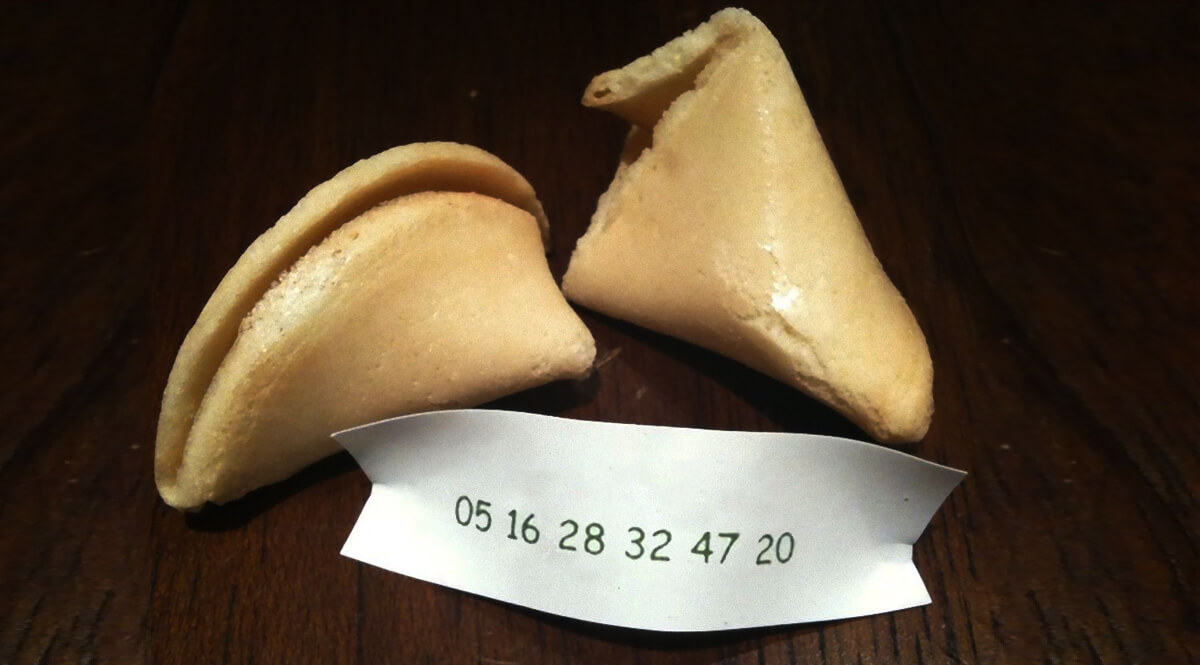 We were eating in a Chinese restaurant some time ago, and I noticed something funny about my fortune cookie. On the back of the fortune (which, I think, said I was going to have a good year) it had a series of numbers. It was only the second or third time I saw those numbers there that I realized what they were. There were six, two-digit numbers—lottery numbers. How exciting! Here, within my fortune cookie, are the winning numbers for this week’s lottery. And I’ll bet a lot of people actually go out and buy a lottery ticket based on those numbers, given to them by a cookie. There were eight people at my table that night, and all eight of us had different numbers. All 80 people in the restaurant probably had different numbers. I can’t think of anything, really, that better illustrates the stupidity of fortune-telling.

You know, somewhere, someday, by the sheer weight of probability, someone is going to get a winning set of numbers out of a fortune cookie—and they will forever believe that they won because the fortune cookie told them what was going to be. They’ll tell their friends. It may never occur to them that the cookies were wrong five million times and right once. The people who make fortune cookies know that they are nothing but entertainment. We’ll get a laugh out them and pass them around to fit a fortune with a person—but they usually fit everyone in some way. All around the country, you’ll find astrology columns in the newspapers. Try to pin down the truth from any astrologist and they’ll tell you it is all for entertainment, as well. None of you really take it seriously, do you?

The hunger to know the future is so strong that people make real-life decisions based on the star charts and readings of astrologers, and based upon the predictions of psychics and others. Do you remember when Orange County, California—one of the richest counties in America—went bankrupt? You may or may not have heard what happened: the man who was investing their money was consulting a mail-order astrologist and a psychic for interest rate predictions—losing $1.6 billion of public money. He was not alone in wanting to know the future; we all want to know it sometimes. Last year, Americans spent over $300 million calling psychic hotlines. But there is one thing that is very important for you to know about the future. And if you know it, it will save you a lot of money, heartache, and frustration—and probably from making some bad mistakes based upon other people’s advice.