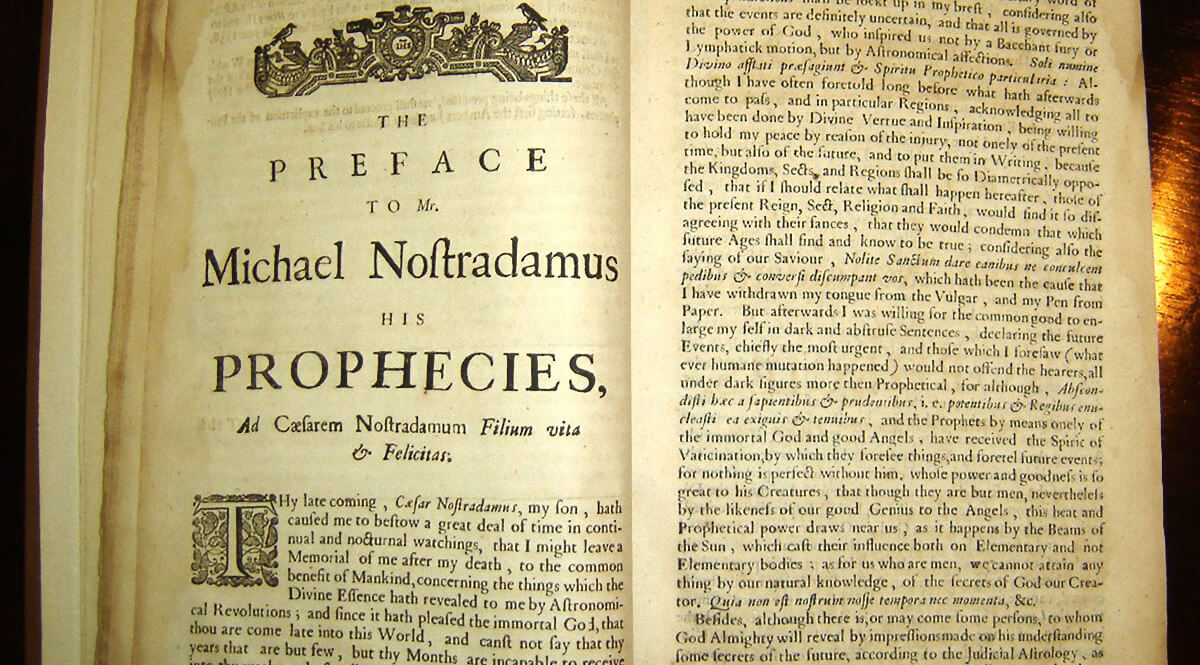 Unless you have just recently arrived from outer space, you have probably heard of Nostradamus. The odds are you don’t know very much about him; you may have heard that he made a lot of predictions or prophecies and that some of them have come true. And the presumption is that those that haven’t come true—well, those must be somewhere out in the future and have yet to take place. Let me see if I can get you into the picture on Nostradamus.

He was born in France, of Jewish parents, in 1503. In his lifetime, the Inquisition was active and very hard on Jews. The approach to trying to convert the Jews in those days was fairly simple: you brought them in, showed them the instruments of torture, threatened to burn them at the stakes, and gave them the choice to accept Catholicism or die. It’s a very effective technique of evangelism; the Muslims used it throughout the known world, in their day. And so, Nostradamus’ Jewish parents converted to Catholicism when he was nine. He became a highly intelligent, well-educated man and a physician. In the process, he also became an astrologer and a clairvoyant. He’s been called a prophet by some writers, but that’s an inexcusable bit of ignorance on their part. There is a wide gulf between a prophet on the one hand and an astrologer or clairvoyant on the other. Nostradamus will serve us well as an example of the latter two.

His work exists in collections of ten sets, each containing 100 four-line poems. His predictions are written in highly symbolic language. They are also in archaic French, with a number of other old languages mixed in—so they are very difficult to translate and just as difficult to interpret. With all the peculiar metaphors, figures of speech, and even unknown terms that are in them, the interpreters have a lot of latitude in expounding one of Nostradamus’ quatrains. For example, the following could have any number of possible meanings:

The sloping park, great calamity,
Through Hesperia and Lombardy;
The fire in the ship, plague and captivity,
Mercury in Sagittarius, Saturn fading.

So, through sometimes rather creative interpretation, some of Nostradamus’ predictions have come to pass. So is he a prophet? What are we to make of astrologers, clairvoyants, and the like? Well, not much. First, let’s consider Dart’s First Law of Prediction…

Get your FREE COPY of Real Prophets #1this message now!

Get a FREE copy of
Real Prophets #1