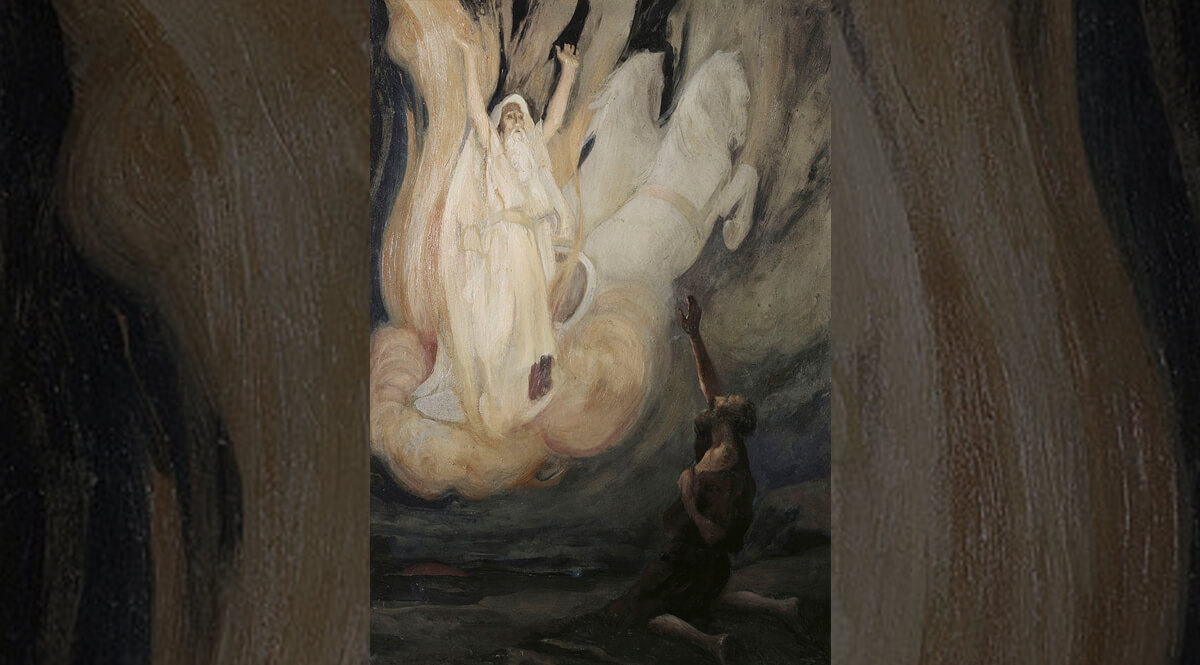 One of the most dramatic moments in all the stories of the Bible is that moment when Elijah and Elisha have crossed over the river Jordan, and a great whirlwind comes down from heaven, and a chariot of fire drawn by horses of fire carries Elijah away. It was really something to see, I suppose. It was the moment when power was transferred from Elijah to Elisha, and Elisha received a double portion of the spirit of Elijah—along with his mantle. But there’s a puzzle here, and it isn’t so much that change of power. Later on, Elisha will fall sick and die of his sickness. Why was Elijah taken away so dramatically? Why didn’t he just follow his course; why didn’t he go to bed one day and die like Elisha did? What’s with this chariot and horses of fire?

The assumption is that Elijah was taken up into heaven, but no one at the time thought so. The school of the prophets sent men everywhere looking for his body—wherever the tornado that took him away might have dropped him. And there’s no real reason from the Bible to think that he went to heaven. There is, however, one more consideration. Jehoram became regent of Judah at about the same time as Elijah’s departure. Then, some time later, Jehoram gets a letter from Elijah. Strange thing. You’ll find this story in 2 Chronicles, chapter 21.

Moreover he made high places in the mountains of Judah, and caused the inhabitants of Jerusalem to commit harlotries, and led Judah astray. And there came a writing to him from Elijah the prophet, saying, Thus says the Lord God of David your father, Because you have not walked in the ways of Jehoshaphat your father, nor in the ways of Asa king of Judah, But have walked in the way of the kings of Israel, and have made Judah and the inhabitants of Jerusalem to play the harlot, like the harlotries of the house of Ahab, and also have slain your brothers of your father’s house, who were better than yourself: Behold, with a great plague will the Lord strike your people, and your children, and your wives, and all your goods: And you shall have great sickness by disease of your intestines, until your intestines come out because of the sickness day by day.