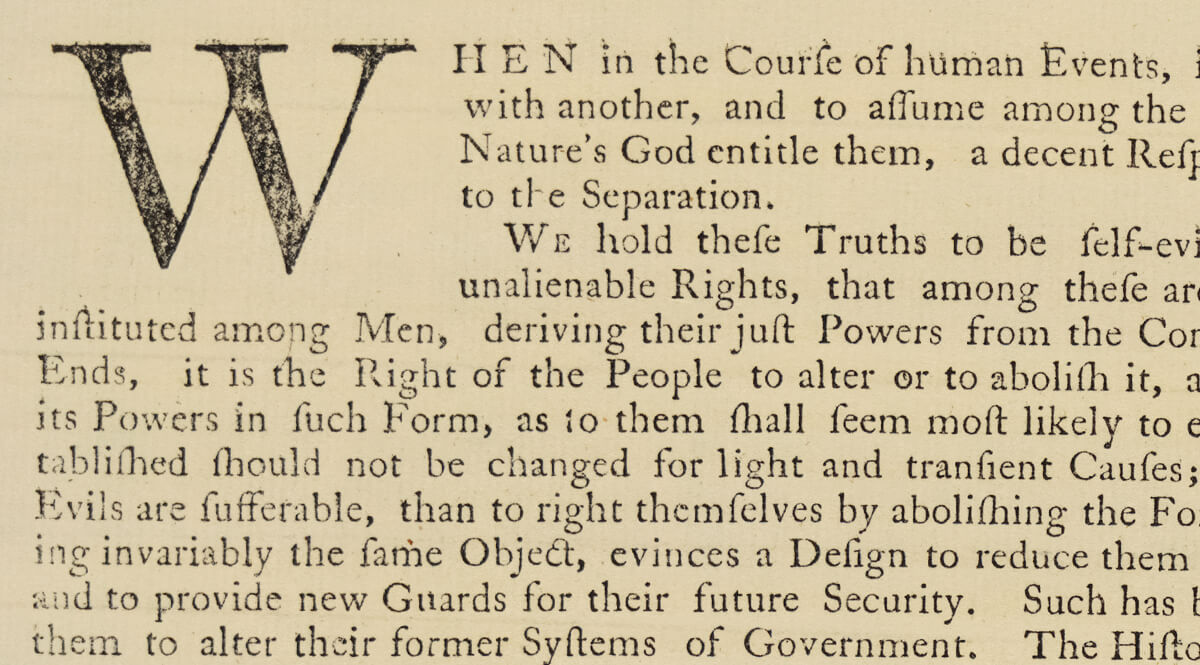 When in the Course of human events, it becomes necessary for one people to dissolve the political bands which have connected them with another, and to assume among the powers of the earth, the separate and equal station to which the Laws of Nature and of Nature’s God entitle them, a decent respect to the opinions of mankind requires that they should declare the causes which impel them to the separation.

We hold these truths to be self evident, that all men are created equal, that they are endowed by their Creator with certain unalienable Rights, that among these are Life, Liberty and the pursuit of Happiness.–That to secure these rights, Governments are instituted among men, deriving their just powers from the consent of the governed.

You recognize those words, of course. I wish every American child had them committed to memory because they are among the most important words ever committed to writing by the pen of man. This is the opening of the Declaration of Independence of the United States of America. The thinking behind this document is at the core of the most fundamental liberties of man. And while many of the men who signed this document were slave owners, these same men set in motion the wheels that would bring an end to slavery in the civilized world.

The Declaration was, in the main, the words of Thomas Jefferson, but the leadership of all the existing states signed it, and it honestly reflected their values and beliefs. Perhaps the most stunning idea put forward in this Declaration is that men–all men–are created equal and that they are endowed by their Creator with certain unalienable rights. I say stunning, but that’s only in the light of modern politics. To the men who signed this Declaration it was obvious, it was a self-evident fact that men were created and were endowed with rights by their Creator. In other words, they believed in God and they considered God to be the guarantor of the liberties man, including Life, and Liberty and the pursuit of Happiness. For these men to speak of God as Creator was as natural as breathing, for they were all believers.

One of the most interesting things about them, though, was they were not much inclined to sectarian religion. Perhaps there had been too much suffered at the hands of a state church for them to feel comfortable in any way with an established church, or maybe with any particular church at all. But the belief in God, now that was another matter. In the minds of the men, far and away the majority of those who signed this Declaration, the belief in God was beyond question.