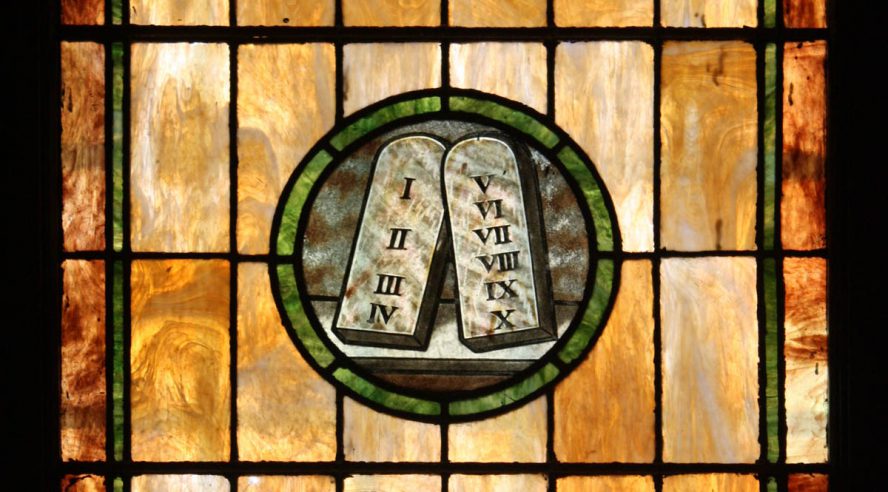 Was there something wrong with the Ten Commandments? Were they weak legislation in the first place? Or did they somehow become obsolete with the passage of time? If, as some suppose, the time came for the Ten Commandments to be abolished, there must have been a reason for it.

The idea of the abolition of law is not foreign to us. We “abolish” or repeal laws often enough. But when we do repeal laws, why do we do it? There are many reasons. The law may be unenforceable. It may be unpopular with the people, and because of massive disobedience (“They can’t put all of us in jail”), the law simply can’t be maintained. The classic example of this was prohibition.

On the other hand, we may repeal legislation because it has become obsolete. There may have been a time when it was a good idea to require a flag man to walk ahead of an automobile as it passed through a town, but not anymore. Changes in technology, changes in population density, economic trends, natural disasters, can all make good legislation turn sour.

We could point to dozens of examples, but there is still only one fundamental reason for the repeal of a law: It is not a good law. It was either (1) a bad law in the first place, or (2) it became a bad law in time.

For which of these reasons did Jesus repeal the Ten Commandments?

Do you see the problem we’re dealing with? It’s one thing to create a doctrinal argument to the effect that God abolished the law, but it’s another matter altogether to explain why such a thing should be done.

This brings us logically to the next question. The question is simple enough, but receives surprisingly little attention.

When a Law is Repealed

What is the effect of the repeal of a law? The answer seems simple enough. When a law has been abolished or repealed, it is no longer a crime to break that law. Technically you cannot break it because it no longer exists. An action that previously was considered a crime, worthy of punishment, is now deemed acceptable by society.

During prohibition, you could have gone to jail for having a case of wine in the trunk of your car. After prohibition was repealed, that same case of wine made you no more a criminal than would a suitcase full of clothes.

Once a law is repealed or abolished, there are no more penalties, no more guilt, no fines, no imprisonment—not even an admonition from the judge. You cannot break the law, for it is no longer a law.

But perhaps the law of God is different in some way. Perhaps the Ten Commandments could be abolished and yet it still is wrong to break them? But, no, the biblical writers seem to look at the Ten Commandments the same way we look at the laws of man. John categorically defined sin so no one could misunderstand: “Sin is the transgression of the law” (I John 3:4). What happens to sin, then, if the law is abolished? Listen to Paul’s reply: “For where no law is, there is no transgression” (Romans 4:15). Later in the same epistle, Paul affirms, “Sin is not imputed when there is no law” (Romans 5:13).

Let’s see if we can understand this. Suppose for a moment the Commandment “Thou shalt not steal” is abolished. (For, if the Ten Commandments are abolished, that law no longer exists.) Since there is no transgression where there is no law, then it is not a transgression to steal. In that case, there is no penalty, no guilt, and no forgiveness needed.

And, if no forgiveness is needed, then no one needs a savior. Indeed, if the whole law were abolished, then that is one way of getting sin out of the world without the death of the Son of God.

The whole thing begins to sound like so much religious bickering. Is it possible that those who advance this argument don’t really believe that the Ten Commandments are abolished, but that they use this argument as a smoke screen?

Perhaps the most astonishing aspect of this question is that anyone, in the face of the plain teachings of Jesus Christ, would even suggest that the Ten Commandments were abolished. In the Sermon on the Mount—Jesus’ most fundamental teachings—Jesus said plainly:

How are we to understand this statement? Did Jesus mean to say, “Think not that I am come to destroy the law or the prophets: I am not come to destroy but to abolish”? His next statement is even clearer:

For verily I say unto you, Till heaven and earth pass, one jot or one tittle shall in no wise pass from the law, till all be fulfilled.

“Ah, yes,” someone will say, “notice that Jesus fulfilled the law, and then it was able to pass away.” The King James translators did a grave disservice in the translation of this particular passage. The Greek word translated “fulfilled” in verse 18 is not the same word as the Greek word for “fulfill” in verse 17. Even the English reader can tell the plain difference between the two Greek words. The word in verse 17 is plerosai and the word in verse 18 is genetai. Verse 18 should be translated, “For verily I say unto you, Till heaven and earth pass, one jot or one tittle shall in no wise pass from the law, till all come to pass.”

Have Heaven and Earth Passed?

Have heaven and earth passed? Have all things written in the law and the prophets come to pass? Of course not.

Then let us understand and agree that Jesus meant precisely what He said—not one jot or one tittle shall pass from the law or the prophets till all these things written in the law and the prophets have come to pass.

Now, as if all this were not enough, Jesus continued in the same passage to explain the consequences of what He just said:

After the giving of the Ten Commandments and after Israel had boldly promised that they would keep the law, God said:

[…T]hey have well said all that they have spoken. O that there were such an heart in them, that they would fear me, and keep all my commandments always, that it might be well with them, and with their children for ever!

Speaking of these commandments, Paul said:

And the commandment, which was ordained to life, I found to be unto death.

Listen to Paul as he continues:

Contrast Between Letter and Spirit

But, you ask, is Paul really talking about the same thing? Notice verse six:

But now we are delivered from the law, that being dead wherein we were held; that we should serve in newness of spirit, and not in the oldness of the letter.

Notice he is talking specifically about the Ten Commandments and drawing the contrast between the letter and the spirit.

Where does “Thou shalt not covet” fit in the scheme of the law? It is the tenth Commandment.

Since it is obviously vain to argue that the Ten Commandments were abolished, why does anyone try? A careful analysis of the Commandments themselves may give us a clue.

What religion, what denomination, what sect, argues that it is permissible to have more than one God—to violate the First Commandment? Is there a cult somewhere that encourages its membership to take God’s name in vain? What church holds it permissible to dishonor your father and mother? Is there anyone who teaches that it’s honorable for a Christian to lie, covet, steal, commit adultery?

The Sabbath Was Made for Man

When you think about it, there is only one commandment that is in question—the fourth commandment: “Remember the Sabbath day to keep it holy.”
There is at least one denomination that teaches that the Ten Commandments were indeed done away with, but that nine of them were reinstated in the New Testament (the fact that no scripture can be found to this effect notwithstanding). Which commandment do you suppose is missing by their reckoning? The Sabbath.

In addition to Jesus’ clear support of the law, He went to great lengths to demonstrate the true intent of the Ten Commandments, in particular the fourth one.

“The Sabbath was made for man, not man for the Sabbath,” He declared (Mark 2:28). Again and again He demonstrated, by both word and action, that the Sabbath is a time of joyous liberation from the burdens of this physical life.

It was Jesus’ custom to attend the synagogue each Sabbath and on one occasion there was a man who had a withered hand. Those present watched Jesus closely to see whether He would heal the man on the Sabbath.

Jesus asked the man to stand up and turned to face the assembly. “Is it lawful,” He asked, “to do good on the Sabbath day or to do evil? To save life or to kill?” But they wouldn’t answer. Jesus then told the man to stretch out his hand and it was restored whole as the other hand.

Earlier, He had healed a woman bowed over with a spirit of infirmity. Naturally, He healed her on the Sabbath day. When the ruler of the synagogue criticized His healing on the Sabbath, Jesus had harsh words for him: “Thou hypocrite, doth not each one of you on the Sabbath loose his ox or his ass from the stall, and lead him away to watering? And ought not this woman, being a daughter of Abraham, whom Satan has bound, lo, these eighteen years, be loosed from this bond on the Sabbath day?” (Luke 13:15,16).

In no way did Jesus break the Sabbath. He actually confirmed the Sabbath by correcting the Pharisee’s misconception about the day.

Jesus kept the Ten Commandments perfectly throughout His life here on earth. Jesus Christ is “the same yesterday, today, and forever” (Hebrews 13:8). If we’re going to call ourselves disciples of Christ, isn’t it about time we stopped arguing with our Teacher and started doing the things He said?

Which of the Ten Commandments Did Jesus Repeal? (59 KB)