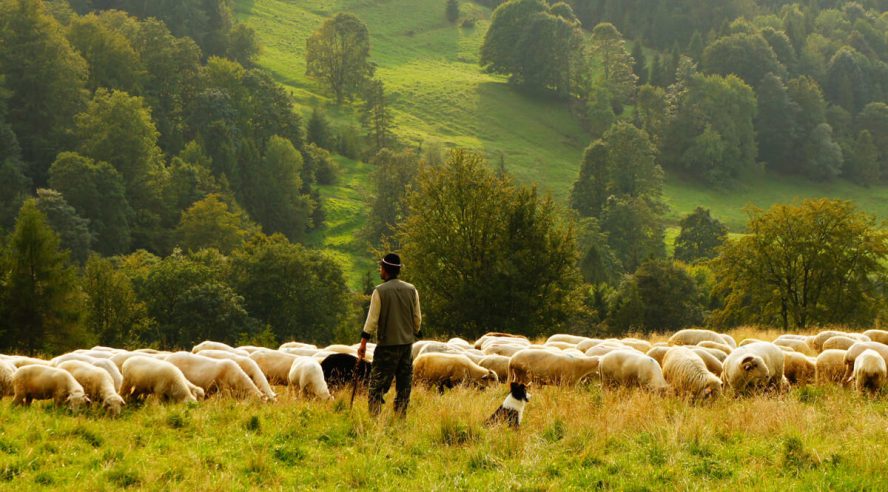 What is the shape of a flock of sheep? This probably belongs on a list of the world’s most meaningless questions, for a flock of sheep has no shape. It is a collection of living things, constantly moving. It may be longer along the axis of movement, it may be constricted crossing a bridge, or it may be scattered over the hills, but it will never be the same from moment to moment.

How is a flock of sheep organized? In the sense that human beings use the word, it is not organized at all. Yet, there is an organization of sorts. A small group of sheep, by going their separate ways, could totally frustrate a sheep dog; but they don’t. Their informal organization keeps them together and makes them a unit to a shepherd and his dog.

How is a flock of sheep governed? Most of the time, not at all. When there is no overwhelming reason—protection, movement to new pasture—sheep are left largely ungoverned. They spread over the hills to make maximum use of the grass available. Munching grass and making wool requires very little in the way of governance. The shepherd makes no attempt to keep them together unless there is an immediate threat. They can’t eat grass and make wool while they are penned up in fear of attack. But the shepherd can’t keep them there too long. Excessive efforts at protection defeat the very purpose of having a flock of sheep.

When the time comes for the whole flock to do something together, then a sort of governance comes into play. Sheep are gathered together by the cooperative efforts of dog and shepherd, and a general direction of march is set. From then on it is a matter of maintaining direction of movement and collecting stragglers. There is nothing we would recognize as structure in a flock of sheep. There are no ranks as they move. They do not line up single file unless constrained by fences. They do not graze in assigned areas.

When Jesus uses terms like sheep, shepherd, flock, and fold to describe his relationship with his disciples, we might do well to think of some of these things. As a church grows ever larger, more and more of its energy can be spent in organizational efforts. There is a greater likelihood that a large flock will attract predators, and can easily exhaust itself trying to protect against them. A wolf may take one or two sheep, but the over-protective shepherd can lose a dozen by keeping them penned up too long where they cannot graze. And ill-fed sheep are more susceptible to disease.

A flock of sheep on the move from one pasture to another can seem chaotic, but this is the way sheep move. In a church, the chaos that results from growth creates an urge to organize, manage, direct, control. The result is that we spend too much of our energy struggling with one another over the shape and movement of the church, and too little doing whatever it is that Christians are supposed to be doing.

What are we supposed to be doing, anyway? A sheep doesn’t have to think about his job. All he has to do is to make wool, make mutton, and make more sheep. But we churchgoers can think about what we are supposed to do. We can urge with the shepherd and bleat back at the sheep dog. We can take off over the far hill while the shepherd is trying to get everyone together. We can explore instead of feed, and produce inferior wool and weak offspring. We can waste time trying to organize the sheep when all they need is to be left alone to feed.

Jesus’ disciples were more concerned about organization than he was. When the mother of two of them requested hierarchical positions for her sons, the other disciples were incensed. Jesus got them together to clarify the matter. He said:

Ye know that the princes of the Gentiles exercise dominion over them, and they that are great exercise authority upon them. But it shall not be so among you: but whosoever will be great among you, let him be your minister; And whosoever will be chief among you, let him be your servant: Even as the Son of man came not to be ministered unto, but to minister, and to give His life a ransom for many.

Whatever the job of the sheep of Jesus’ pasture, it is not to command, direct, and control; not to structure the flock. It is not to create an organizational hierarchy.

I had a letter from a friend which made the point well. Discussing the flock, he wrote: Let’s keep enthusiasm, flexibility and joy alive. Let’s not kill them with bureaucracy and institutionalization…Efficient management sounds like a death-knell for vitality. Our biggest asset is the Holy Spirit inspiring our membership in diverse and exciting ways. Let’s facilitate this, not stifle it.

It may run counter to the conventional wisdom that efficient management is anything but desirable, but remember that Dachau and Buchenwald were models of efficient management. God is not the author of confusion, but the mild disorder that accompanies freedom is something we should learn to live with.

I exhort therefore, that, first of all, supplications, prayers, intercessions, and giving of thanks, be made for all men; For kings, and for all that are in authority; that we may lead a quiet and peaceable life in all godliness and honesty. For this is good and acceptable in the sight of God our Saviour; Who will have all men to be saved, and to come unto the knowledge of the truth.

The goal of government, civil or divine, is not the domination of man, but the salvation of man. We might do well then, to spend less time attempting to govern one another, and more time making wool.